Making sense of it all – Art and sensorial experience

Awareness of the senses could seem to be the alpha and omega when working with art, but more than often, we actually don’t reflect much on which sense we choose over another, why and what difference it makes. Our art school offers several art courses for the students to reflect on the mediums they use and what kind of sensations are activated. So for this entry, we’re going to look into some examples of artworks over time which have added “a bit more sense” to what it means to experience art!

Another view on vision

As the majority of art practices – and the societies as a whole – are highly centered around vision, it is understandable that thoughts on the different senses doesn’t rise automatically. Over time though, philosophers and theoreticians within a wide range of areas have examined and debated what it means to have a certain hierarchy of the senses – with vision as the indisputable crowned king of them all; a subject that Metáfora’s 2nd and 3rd year students examined during the first part of this semester’s course in Critical Theory.

Considering that most art students work with the image in one way or another, it is important to include a critical approach to the act of seeing and how we make use of images in the artistic practice – and it might also be quite fruitful to remember all of the other senses, so below we’ve gathered a few examples of art, that was not only for the eye.

Smelling the coffee – the early rise of olfactory art

One of the earliest examples in art history where smell is used as a medium can be dated
back to 1938, more precisely during the Exposition Internationale du Surréalisme, the
Surrealist Exhibition in Paris. Amongst hundreds of works was a collaborative installation/design by Austrian artist Wolfgang Paalen and Marcel Duchamp, where the
scent of roasted coffee filled the air and expanded the sensorial experience of the scenery that also included ferns, grasses and a pond with water-lilies.

Interestingly enough, Duchamp was already at this point acting against what he referred to as retinal art – art that was meant to please the eye. His critical approach and search for alternative means of artistic expressions for sure made a mark. One of those quite literally in the form of several chess sets.

Sense the next move – a Fluxus take on chess

During the 1960s, Japanese Fluxus artist Takako Saito created a series of chess sets. The
works were made on request by Lithuanian American artist and founding member of
Fluxus, George Maciunas, who, as Marcel Duchamp, was an enthusiastic chess player,
and the chess pieces was to some extend thought of as a playful homage to the man who
had said that “all chess players are artists”.

Saito’s series of artist’s multiples include amongst others Sound Chess, Spice Chess and
Weight Chess. The rules of the game are the same as for any traditional game of chess,
but using these sets, the players have to sharpen other senses than the one of sight for
being able to follow the rules. As an example, players engaging with the Spice Chess (
where each piece is a small container filled with a particular spice ) has to fully make use
of the olfactory sense to identify each single piece, recognize their positions and move
them accordingly.

Besides several other themes, Takako Saito’s collection of chess works clearly questioned
the primacy of vision, and compelled people to consider the value of other senses and the
experiences that comes with them. 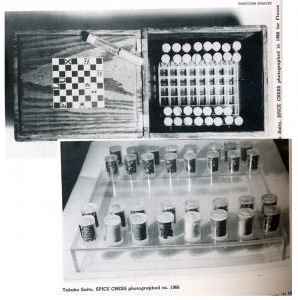 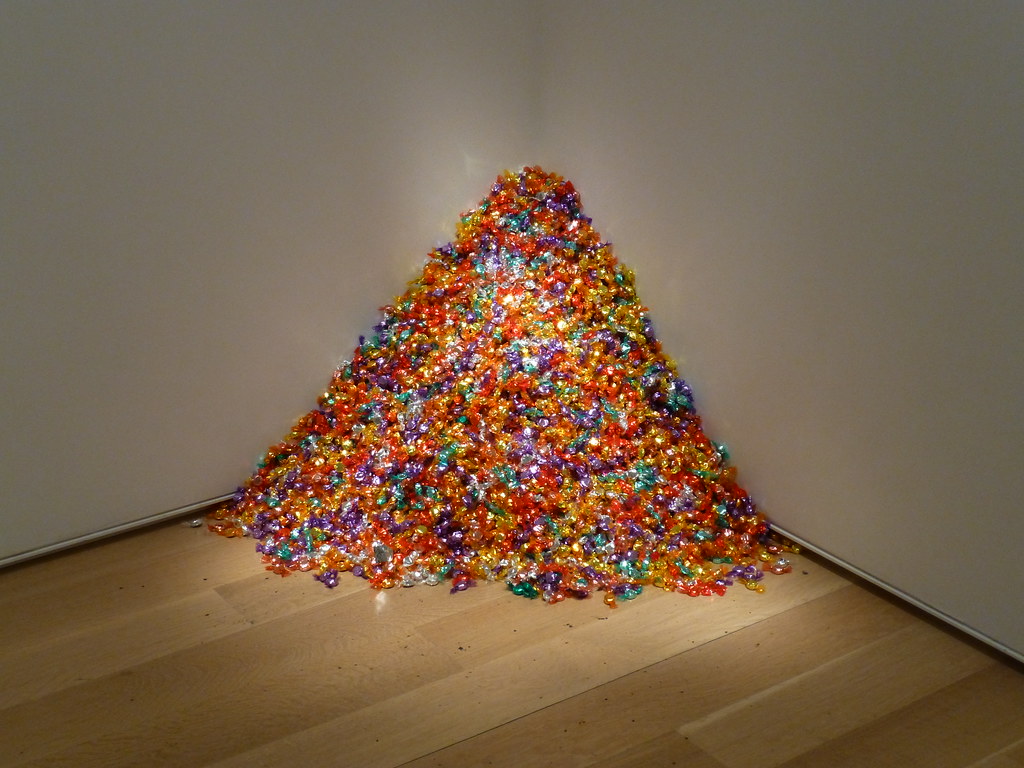 Eat your works – candy with a cause

Food as an ingredient in art is by no means new, and art projects involving the act of
preparing various forms of dishes are present across countries till this day. But you don’t
necessarily have to jump into the role of a chef for employing taste to your art practice.
Another kind of example involving the act of eating is the art piece ”Untitled” (Portrait of Ross in L.A.), from 1990, by Cuban-born American artist Felix Gonzalez-Torres. The work
consists of candy pieces, each piece neatly wrapped in colorful cellophane and piled on
the floor. Visitors are invited to take the candy, thereby participating in its slow
disappearance.

The evidently eye – and mouth – pleasing work did however reveal a much darker
aftertaste as the visitors would learn that the starting weight of the candy pile was set
around 79 kilos, corresponding to the healthy weight of Gonzalez-Torres’ partner, Ross,
before he contracted HIV. Gonzalez-Torres made several similar works, all with the cyclic
act of disappearance and refilling, suggesting the cycle of life and death.

Art in every sense

From playful boardgames to poignant candy sculptures, the (art) world of sensory experiments is diverse and enriching. And while debates may go on about which sense is
above or below another, there are endless possibilities for rethinking ways of perception
within the artistic practice. So study art in every sense – Who knows, you might be
surprised about where your senses may take you!

Why do students need “crits” at an art school?

An open mind behind closed doors – a recap on art studies during conf...
Scroll to top