Spell it out – merging the visual and the verbal in art

At Metàfora we offer several courses in the classical visual mediums though we also highly embrace a multidisciplinary approach to the practice of art making. We encourage our students to try out many different mediums and to experiment with fusing them.

Combining mediums can be a rather perplexing thing to do, so for this entry we will take a closer look at two long time rivalling forms of representation – the visual and the verbal – and give some examples of artists who have taken up the task of weaving them together in their works.

When considering the term art, most people will probably first and foremost think about images; visual spaces generating meaning, emotions, and knowledge without words. But for centuries different types of text have been mingling more or less with the image dominated mediums; and this goes way further back than one would immediately think.

Very early examples can be seen in Medieval and Renaissance Art, where several painters implemented text as to further communicate messages within the holy scenes of the paintings. Depictions of long, scribbled scrolls, carefully written inscriptions and even sentences flowing freely through the air, almost like a predecessor of the speech bubble, were amongst the many ways of blending words into the images. (See image fig. 1: Fra Angelico, The Cortona Altarpiece, the Annunciation, c. 1432-1434, detail ) 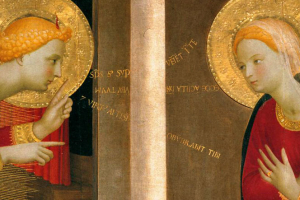 Moving further on to Romanticism, the multitalented English artist William Blake showed his mastery of both poetry and painting with the beautiful book Songs of Innocence and Experience. The work comprises a collection of Blake’s poems accompanied by his own colourful illustrations. The first part of the book was published in 1789 while a second part was added in 1794. Click here for a further look into this stunning example of Romantic art.

Pop writing and spelling out ideas

With the expansion of the art field propelled especially by the different avant-garde movements, the word seemed to leak further and further into the image dominated art sphere. The eclectic mixed media productions of the Dadaists included both the written and the spoken word, and later movements such as for example Fluxus and Pop Art likewise played with the merging of the verbal and the visual form. Artists such as the British painter Pauline Boty and the American artist/activist/nun Sister Mary Corita Kent are inspiring representatives of the Pop Art branch that included words in their works. (See image fig. 2: Pauline Boty, Bum, 1966 ). 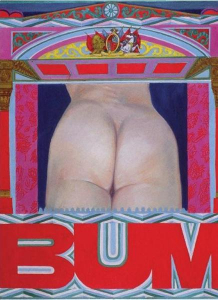 One of the art movements that most prominently placed the verbal above the visual forms of representations is Conceptual Art. Reacting against the art object in itself and revolting against the art market that fetishized, romanticized and commercialised it, these artists turned away from material productions and towards the production of ideas instead. The first definition of Conceptual Art is said to have been coined by American artist Sol LeWitt in an essay written in 1967 titled Paragraphs on Conceptual Art, but the exploration of the idea as art started much earlier. Counting backwards more than a decade from when Lewitt wrote his essay, the Japanese artist Yoko Ono made one of the first out of many works that would be defined as Event Scores: short instructions for performances, that anyone could easily enact. Lighting Piece (1955) consists in its poetic simplicity of a piece of paper with words that reads: “Light a match and watch till it goes out.” As exemplified by Ono’s piece, much of the Conceptual Art generously gave out a part of the “art making” to the viewer herself, who would either perform the piece with her own body, or imaginatively create the piece in her mind.

When considering art that blends words and images, it is literally hard to overlook the works of American artist Barbara Kruger. Hailed by many as an icon of feminist postmodern art, her powerful graphic pieces display critical phrases related to consumerism, desire, gender and identity. Since the 1970s and till the present, Kruger’s style remains recognisable with her signature colours of black, white and red, and bold texts overlaying found black-and-white photographs, that she has edited. Adapting her art to the style and placement of the mass communication medias that she simultaneously criticised, her works has appeared on everything from posters to buses, billboards and train station platforms. One of her most famous works is the piece titled I Shop Therefore I Am from 1987. (See fig. 3) 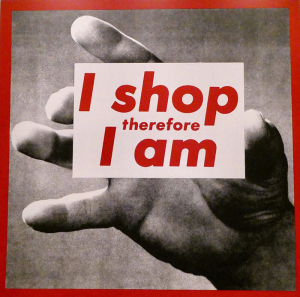 Talking about a contemporary hybrid

Rounding up this broad field of art that blends words and images, mentioning the lecture performance seems to be a proper way of closing. Having existed as a genre since the 1960s, this art form is currently seeing a revival in diverse art practises all over the world. Narrative and performative techniques are merged with academic research in this ever-changing hybrid that can include everything from visual art to sound, video and net-based art. The lecture performances are diverse in subjects with investigations spanning over history, philosophy, politics and popular culture, though it could be argued that many of the topics move around the subject of knowledge – its production forms and mechanisms – as well as questioning the potential of art in knowledge societies. Examples of artists working with lecture performances are Lebanese artist Walid Raad, the American artist Joan Jonas, Italian Chiara Fumai and Nigerian Otobong Nkanga. With this wrap up, all that is left to say is just: What are you waiting for? Spread the word!

An open mind behind closed doors – a recap on art studies during conf...

Everything an art student wants is….
Scroll to top