Piece it together – the context of collage

Originality is often one of the buzzwords when making art. But not all that is original is made from scratch. A lot of artists that have been called original included premade things in the process to create their pieces. The originality was how they did it – how they played with and recontextualized something that was already full of meaning.

At Metàfora we don’t only provide our students with skills in working with raw material “from scratch”, we also find it important that every art student develops her analytical skills and considers the possible context and history a particular material or object may already possess – and exactly this was in focus during our latest workshop called Collage – in the broadest sense.

The workshop was designed specifically for the advanced level students and the very open and flexible approach resulted in a wonderfully diverse outcome of artworks – from photomontage and assemblage sculpture to textile works, videos and text-based pieces.

As a little homage to the collage and all its possibilities, we have gathered a few examples of how this technique of patching together premade materials has expanded over time and mediums.

From cubist collage to dada photomontage

Collage as a technique goes back to the beginning of the 20th century. The term was coined by Georges Braque and Pablo Picasso – the word coming from the French coller, “to glue”. Collage became a favoured way of working for many Cubist artists, and in the beginning, the material used for the technique was mainly paper but also small objects, leading to the type of three-dimensional works later termed as an assemblage.

It did not take long before other avant-garde groups saw the potential of collage and included it in their practice; amongst those the Dadaists. The artists of this movement quickly started adding further elements to the collage: from old receipts to candy wrappers, and different types of photographic material. A key figure in the development of what became known as the photomontage was the German artist Hannah Höch. (see fig. 1 Hannah Höch, Das schöne Mädchen (The Beautiful Girl), 1920. Image courtesy bpk, Berlin / Private Collection / Art Resource, NY / Höch, Hannah (1889-1978) © ARS, NY)

Höch’s both humorous and highly critical works evolved around identity and gender in the context of German society. Later generations of especially female artists exploring issues on gender, sexuality and race have likewise used the strategies of collage in their works. A couple of examples are British Penny Slinger, the American artist Martha Rosler and Kenyan-born Wangechi Mutu.

Walking within the artwork – collage as environment

Alongside Hannah Höch, another dadaist artist was building an immense structure in his studio, bringing the collage technique to new heights. The immersive environment titled Merzbau –by German Kurt Schwitters- was created in the years from 1923 until 1937. Cardboard pieces and discarded materials formed this huge structure of columns and cave-like spaces full of found objects and artworks – from Schwitters himself as well as from fellow artists. The whole construction and also the art pieces and objects were continuously changed and rearranged over the years, making it an ongoing assemblage art experience.

Jumping from the 20s and 30’s to the present time, a contemporary artist who has mentioned Schwitters as inspiration in her practice is French Laure Provoust. Provoust works with basically every possible medium you can imagine and the collage technique is evident through her practice, be it in videos or whole installations. (See fig. 2 Laure Provoust, Farfromwords, 2013. Image courtesy Whitechapel Gallery)

Around the clock – a 24-hour montage

As we have seen, the collage technique can take many forms – from two dimensional “traditional” collage to three-dimensional assemblage including sculpture and installation, and finally, there is also the montage that relates to film. A great example of this cinematic technique is the piece simply called The Clock, made by the American/ Swiss visual artist and composer Christian Marclay in 2010. (See fig. 3 Christian Marclay, The Clock, 2010. Image courtesy tate.org.uk)

The montage is exactly 24 hours long and consists of thousands of film and TV clips showing mostly clocks and watches. The clips are edited together to show the actual time, so whenever the work is on display, it is always set according to the real-time of the particular place. The footage that has been appropriated for the piece counts the last 100 years of cinema, so as a viewer you do not only move through real-time, you simultaneously move through the long history of cinema itself. 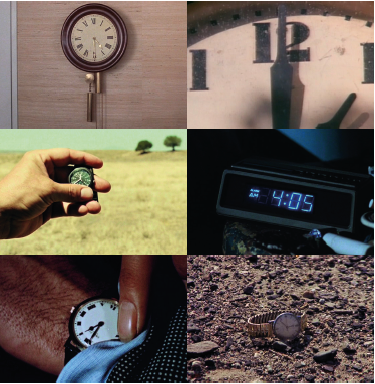